The Congressional Budget Office (CBO) this week released their new “Budget and Economic Outlook” for 2018. As usual, it has all sorts of facts and figures that policy nerds in and out of Washington, D.C. have been commenting on.

One of the biggest fights is about the source of the long term fiscal imbalance everyone agrees will get worse and worse over this century. One side is well represented by a Washington Post op-ed of very prominent Democratic economics luminaries, who blame the Tax Cuts and Jobs Act of 2017. Correcting them in a fairly big way was Brian Riedl of the Manhattan Institute and Dan Mitchell. Each of them proves, beyond a shadow of a doubt, that at least 100 percent of the blame must fall on the spending side of the ledger. Calls for higher taxes as an act of fiscal responsibility ignore these facts.

Riedl and Mitchell and I agree strongly that entitlement spending must be reduced over the long run, and that taxes should not be increased. But earlier this year, the three of us had a bit of a falling out over discretionary spending, and in particular the budget deal Congress passed increasing discretionary spending caps. At the time and up until the present, I was in the distinct minority in maintaining that the budget deal was not a substantive one when it came to the budget or even the discretionary side of the budget, and that there was no danger in the deal leading to a tax increase. Riedl and Mitchell disagree, and believe that the deal makes tax hikes in the future more likely.

CBO seems to have confirmed me in my position. Below is a chart of discretionary spending as a percent of GDP. It starts in 201o, the last year before the GOP took the House and began to enforce spending discipline in the form of the Budget Control Act of 2011. The figures from fiscal year 2019 and onward are based on CBO’s alternative fiscal scenario, which is more pessimistic on the path of discretionary spending than the baseline is. 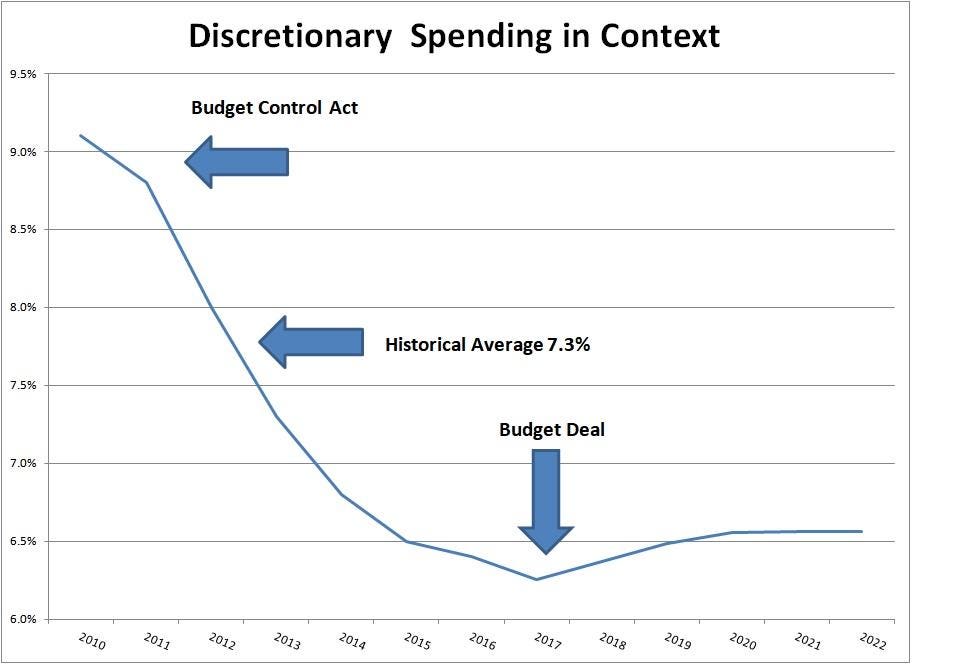 This chart tells us several things:

This is a huge win that two Republican Speakers–John Boehner and Paul Ryan–along with Senate Majority Leader Mitch McConnell never get credit for from our base or our budget experts. Having inherited about the worst (post-stimulus, Obamacare era) spending outlook ever, they turned it into the chart you see above–all while President Obama and sometimes Majority Leader Harry Reid objected vociferously.

For the cause of limited government, it means that this fight was won. We can and should now focus–as Riedl and Mitchell have done this week–on the actual cause of federal government overspending, entitlement programs. It also means that discretionary spending is not an input to whether taxes are going up, going down, or staying the same.

DON’T MISS OUT!
Subscribe To Newsletter
Be the first to get latest updates and exclusive content straight to your email inbox.
Give it a try, you can unsubscribe anytime.

Subscribe To Our Newsletter
Be the first to get latest updates and
exclusive content straight to your email inbox.